The best
Soundbars under 100 Dollars
compared

Good sound and low budget - two things that are quite compatible

Buying a soundbar does not necessarily have to be accompanied by high costs: Many entry-level models or older, reduced models are nowadays already available at a reasonable price. Of course, you can’t expect any sound miracles in this price range – but they are certainly suitable for upgrading the flat sound of your TV. Here we show you the best models that are kind to your wallet.

Not sure how much your soundbar should cost? In our buying guide, we explain how much budget you should plan for!

In our opinion, the Sony HT-SF150 has the best price-performance ratio in this category. The 2.0 setup is built narrow and comes with a bass reflex speaker, which saves space and you still don’t have to do without low tones. However, it should be noted that the speaker reaches its limits in terms of bass when playing music genres like hip-hop or EDM. Furthermore, the soundbar has a neutral sound profile and gets quite loud.

The SF150 is especially convincing for dialog-heavy content. Thus, voices are reproduced clearly and distinctly. In addition, the soundbar has a Dialogue Enhancement FeatureA Dialogue Enhancement feature improves the clarity of dialogue and voice reproduction., which provides even better intelligibility. Thanks to the existing Bluetooth interface, nothing stands in the way of wireless streaming of dialog-heavy content, such as podcasts, audio books or TV shows. Wired connections include an HDMI port with ARCAudio Return Chanel: With the HDMI ARC connection, the higher bandwidth allows data to be both sent and received over one HDMI cable, saving additional cables in many setups. support, a USB interface, and an optical port.

Due to the low price, the soundbar does not have any height channels and you cannot expect 3D sound format support. Also DTS content can unfortunately not be reproduced by it. However, those looking for an inexpensive soundbar with solid Dolby Stereo sound will not be disappointed with the Sony HT-SF150. 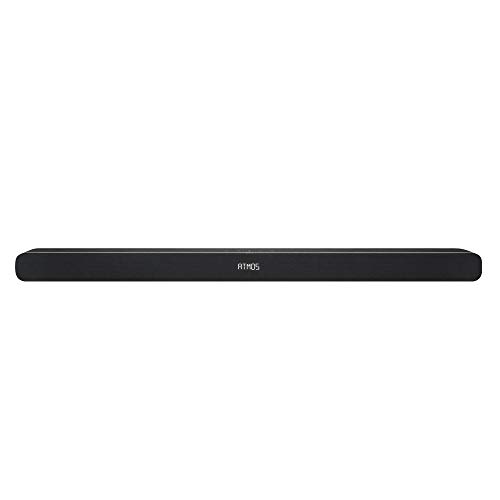 The TCL Alto 8i has a feature that is very rare in this price range: It supports the playback of Dolby AtmosDolby Atmos is a 3D sound format that adds sounds from above to surround sound systems and can also assign additional information to sounds so that they can be reproduced even more realistically. content via its HDMI ARCAudio Return Chanel: With the HDMI ARC connection, the higher bandwidth allows data to be both sent and received over one HDMI cable, saving additional cables in many setups. port. The sound is projected forwards and towards the ceiling, which is supposed to provide an immersive experience. However, we have to admit that the 3D sound is not particularly cinematic at this price. For beginners who want to upgrade their movie experience a bit, it should be sufficient, though.

Besides the support of Atmos content, the slim soundbar comes with other plus points. The soundbar comes with a total output of 260 watts and dual built-in subwoofers which provide deep tones. Moreover, it features bass and treble adjustments as well as three EQ presets.

Despite the low price, the Alto 8i does not lack connectivity options. It comes with two HDMI ports, an optical input and a USB port. An AUX input as well as a Bluetooth connection are also available.

With an external subwoofer and DTS Virtual:X: Samsung HW-A450 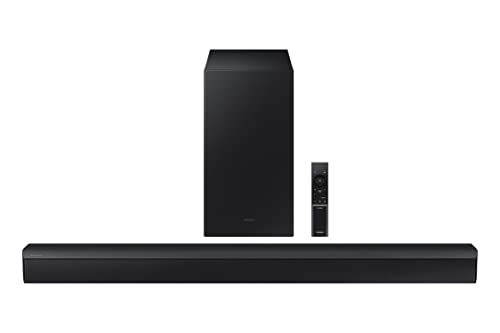 The HW-A450 is one of the most affordable soundbar models from Samsung. The 2.1 setup comes with an external subwoofer and is the strongest in this category with a total power of 300W. This provides an extra portion of bass, which is quite noticeable in an overall balanced sound profile. If that doesn’t appeal to you, you can use the numerous functions to optimize the sound, as the soundbar is equipped with all sorts of adjustment options as well as a graphic equalizer.

Among the soundbar’s features is Adaptive Sound Lite, which automatically adjusts the sound to the content being played. This ensures a high clarity of speech when watching TV shows or listening to podcasts. However, the A450’s performance is not only convincing for dialogue-heavy content: Since it can get very loud, it is particularly suitable for use in large rooms or at parties.

The soundbar supports DTS Virtual:XVirtual 3D sound that can be reproduced by setups without height or down-firing speakers. Psychoacoustic algorithms are used to create surround, height and overhead effects., so it can reproduce virtual surround sound. However, the resulting listening experience is not very immersive. 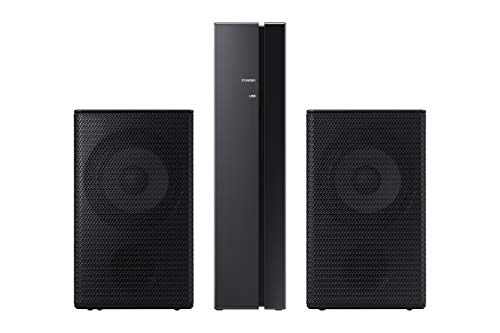 Soundbars under 100 Dollars in comparison

Are cheap soundbars worth it?

Whether a cheap soundbar is worth it obviously depends on which model you are getting. Of course, soundbars between 100 and 200 dollars do not offer as many features as higher priced models, but a cheap soundbar may still be a significant improvement to the poor sound quality of your TV.

How much does a good soundbar cost?

Most soundbars cost between 200 and 600 dollars. If you are willing to make a few sacrifices, though, you can get a good soundbar at a lower price.