The corporate history of Denon goes back to over 100 years of experience in the production of audio solutions and includes milestones such as its significant role in the development of the compact disc. The first AV receiver with Dolby Digital support also comes from the Japan-based company, which is why the manufacturer can definitely be understood as a home theater pioneer.

Today, Denon is still known for its hi-fi and home theater systems. Accordingly, there are also numerous soundbars in the manufacturer’s lineup. Especially the HEOS soundbars, which we will introduce in the following, are very popular.

The HEOS soundbars from Denon are true all-round talents. They also share the common feature that they are all Multiroom compatible. 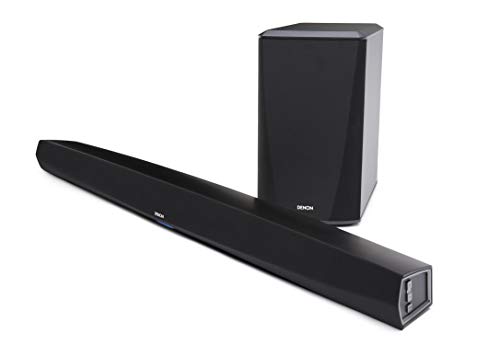 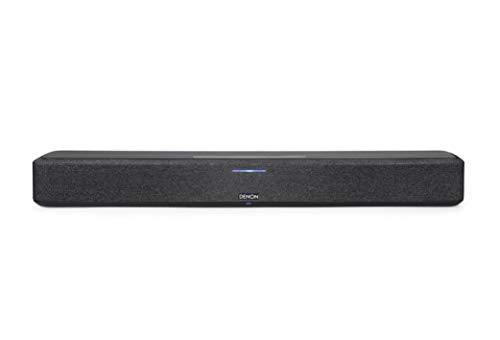 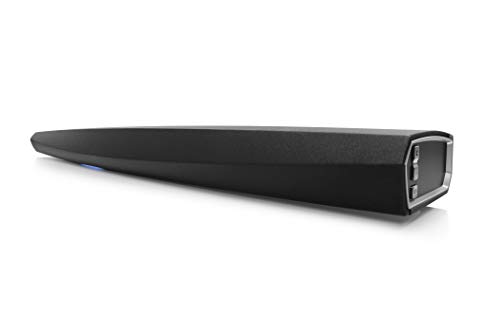 The stylish design of the DHT-S716H already suggests a high-quality product. But Denon’s soundbar also has a lot to offer in terms of its contents: We are dealing with a 3.0-channel system with a total of nine drivers. Besides the center channel, which is supposed to ensure clear comprehensibility of voices and dialogs, the soundbar is also equipped with Denon’s Dialogue Enhancer.

Thanks to HEOS built-in, the soundbar can be easily connected to a wireless subwoofer or surround speakers. Three-dimensional sound is not supported by the device, but surround content in the form of Dolby Digital, Dolby Digital Plus, Dolby TrueHD, DTS and DTS-HD Master is. A WiFi interface and Bluetooth are available as further wireless transmission options.

The DHT-S716H has an impressive number of analog connections. With no less than four HDMI inputs, all sorts of players and consoles can be connected to it. It also has a 3.5mm jack and HDMI ARCAudio Return Chanel: With the HDMI ARC connection, the higher bandwidth allows data to be both sent and received over one HDMI cable, saving additional cables in many setups. output.

The Denon DHT-S516H is a classic 2.1-channel system. Unlike the S716H, this model comes with an external subwoofer that provides decent bass. Dolby Digital and Dolby Digital Plus as well as DTS are supported as sound formats. Although this model does not have a center channel, the Denon Dialogue Enhancer is on board and ensures clearly understandable voices.

Since the S516H also has HEOS built-in, it can be easily connected to other speakers and thus expanded. Due to the feature, it is also compatible with Amazon’s Alexa and Google Assistant and can be controlled via voice command, but you need an external third-party device for that. To stream content wirelessly, Apple Airplay 2 or Bluetooth can be used besides the HEOS app.

As analog interfaces, the soundbar has an HDMI input and an output with ARCAudio Return Chanel: With the HDMI ARC connection, the higher bandwidth allows data to be both sent and received over one HDMI cable, saving additional cables in many setups. support as well as a coaxial, an optical input and an Ethernet interface. There are also an AUX input and a USB port for playback. 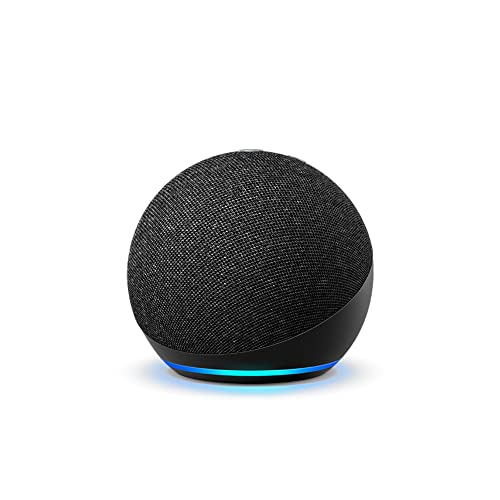 If you have a comparatively small TV or less space in general, the Denon Home Soundbar 550 is a good choice. After all, the soundbar with a width of only 65 centimeters is guaranteed to fit in any living room. Despite the small size, however, the soundbar should not be underestimated: Although it is a 2.0-channel system, it can even reproduce three-dimensional sound in the form of Dolby AtmosDolby Atmos is a 3D sound format that adds sounds from above to surround sound systems and can also assign additional information to sounds so that they can be reproduced even more realistically. and DTS:XJust like Dolby Atmos, DTS:X is also a 3D sound format, with which the surround sound is expanded by height speakers. In addition, it is also an object-based sound format, whereby additional information is assigned to sounds, making them sound even more realistic..

It doesn’t get much smarter than the Denon Home Soundbar 550. Since it has HEOS built-in, it connects easily with other speakers. In addition, it features Bluetooth, Wi-Fi and Apple Airplay for wireless content transfer. Another great feature: You no longer need a third-party device to control the soundbar via voice, since Amazon’s Alexa is already integrated.

Since the soundbar comes with an HDMI eARCEnhanced Audio Return Chanel: A significant increase in the data transfer rate, which means that audio signals no longer need to be compressed before being transmitted to the music system. This noticeably increases audio quality. interface, it supports 4K@60Hz, HDR10 and Dolby VisionDolby Vision is a dynamic HDR format that significantly improves the HDR picture quality of your TV. Not every soundbar can pass this format on to the TV.. Other interfaces include a classic optical port, a USB input, an Ethernet interface and an AUX input.